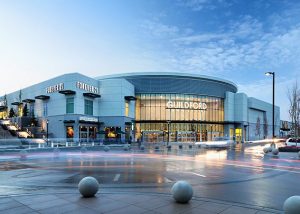 Guildford is a medium sized town in Surrey, but also quite near London. Some historians believe that it was originally called Goldford during the Saxon epoch as a consequence of a gold ford that existed just outside the city. It was also referenced by the poet, Sir Thomas Malory as a city which held great esteem and affection for King Arthur. More recently, it has been recognised as the most southern west tip of the Greater London Built- up Area, and boasts the 12th largest municipal car park in England.

According to the Guildford Society there is a “preponderance from the second half of the 20th century of monolithic structures, brutalist architecture and ugly surface car parks” located close to the river in central Guildford.

Guildford hosts an impressive range of museums, galleries, theatres and nearby castles. Guildford House Gallery is widely regarded as one of the finest in Surrey and is well known for its collection of works by John Russell R.A. Its largest theatre, The Yvonne Arnaud often showcases productions that eventually transfer to the West End of London and other theatre districts around the UK, and Guildford Museum is dedicated to displaying integral aspects of the town’s history, including extensive archaeology and needlework collections. The music event, Guillfest has become a much loved staple of the festival calendar, and regularly welcomes renowned acts from all over the world.

Guildford offers a broad range of options for shoppers, and has something for all tastes from stylish boutiques to independent markets to quirky fashion outlets to shopping centres and beyond. Its main shopping areas are White Lion Walk, The Friary Guildford and Tunsgate Square Shopping Centre, with each offering very unique and distinctive shopping experiences. The White Lion Walk also hosts seasonal events, including, photography and wildlife exhibitions and ghoulish Halloween fun in October. As well as offering all of the shops you’d expect, The Friary also has a selection of first class restaurants, bars and cafes, and Tunsgate Square situated directly opposite the town’s iconic Guildhall clock is well known for its superb range of designer fashion brands and bustling cafés.

In recent years, Guildford has become an increasingly attractive and popular place to due to its winning combination of heritage and modernity. Property types and styles range from stylish state of the art apartments to recently constructed bungalows and spacious Georgian houses. The most exclusive and expensive areas are just south of the town with spectacular views of Pewsey Common. However, if you have a more modest budget to stick to, you can find attractive properties near to Guildford Train Station and also in the nearby village of Onslow, which has recently developed a reputation as being a desirable destination for young families. There are many schools in Guildford that enjoy an outstanding academic reputation, including Holy Trinity cofe, St Thomas of Canterbury and St Joseph’s RC. The nearby Surrey Hills also provide an excellent location for outdoor sports including hiking and mountain biking, and nearby rural areas include the delightful village of Shere and Stoke Park- home to a range of winter activities including ice skating. The town is close by to the A3 and 35 minutes from London Waterloo Station, making it eminently accessible for commuters.

Guildford boasts an excellent range of options for leisure and sports lovers. The Spectrum Centre contains a variety of swimming pools for all ages, ten pin bowling, a laser tag arena and an ice rink, as well as hosting local sports teams including, Guildford City Football Club and the Guildford Flames, who have enjoyed consistent success in the English Premier Ice Hockey League. The town also hosts Guildford Crows Aussie Rules FC, who were established in 2009 and have become a formidable presence within the AFLGB Southern Division, and the Guildford Rowing Club who have recently won the Henley Women’s Regatta.

House prices in Guildford are interesting to say the least. There are houses in the town with price tags that anyone who lives outside the South East may find hard to believe. A 4 bedroomed detached 60s house with a standard sized garden for £925k? Surely some mistake.

The legal jobs market in Guildford is very different to London. There are a good number of firms here, but they expect to be paying a very different salary level to central London and city firms, even when they do some of the same work. Guildford has attracted branch offices of the multinationals here in the past, presumably as partners have decided they don’t want to keep commuting into central London for the rest of their lives, but even here there is a discrepancy in salary levels between workers here and those in central London law firm offices. The high street of Guildford and surrounding towns and villages possess plenty of conveyancing and wills & probate outfits. In fact wills & probate seems to have been one of the most popular areas of law for us in the town for many years. A bit like Eastbourne I guess.. To find out how Ten Percent Legal Recruitment can help you find a legal job in Guildford please email your CV to cv@ten-percent.co.uk.